Do you know your water?

Households in rural Odisha take the longest average walking time to reach a water source – more than an hour.

-by Saumya Tewari and Rohan Bapat, originally posted on June 22, 2016

In Odisha, Jharkhand and Madhya Pradesh, more than 35% of rural households walk the 1/2-km distance. 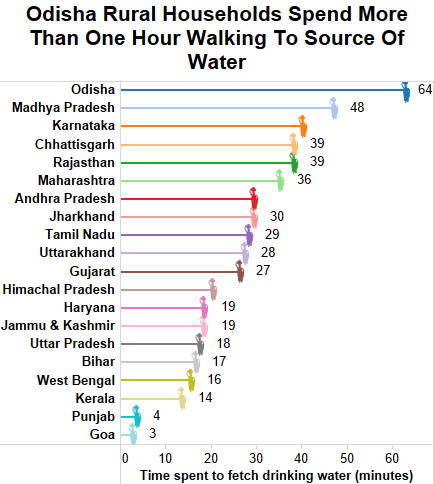 One in four rural households spends more than half an hour walking to a water source, according to the Indian Human Development Survey (IHDS II), which surveyed 42,153 Indian households.

Households in rural Odisha take the longest average walking time to reach a water source – more than an hour. In addition, they spend time waiting their turn. Once filled, water jugs can weigh as much as 20 kg.

The situation isn’t any brighter in urban areas: 20% of households spend more than half an hour reaching water sources.

In the summer, 36% of households across India take 30 min to a water source, up from 23% in other seasons. 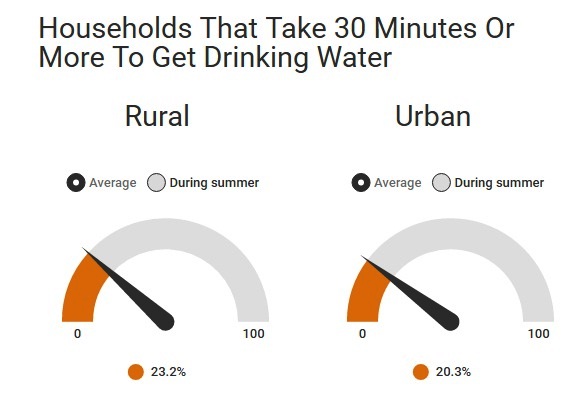 India is the largest groundwater user in the world with an estimated 230 cu km used every year, more than a quarter of global consumption.

The limited success of surface irrigation projects and cheap electricity for farmers using tube-wells has led to an over-reliance on groundwater and aquifers.

A comparison of pre-monsoon groundwater level in the agricultural states of Punjab and Haryana shows that the percentage of wells with water deeper than 20 m has increased 40% in Haryana and 70% in Punjab between 2011 and 2015.

Quality of drinking water is compromised

With safe drinking water hard to access for so many, India loses as many as 73 million working days due to water-borne diseases, according to this 2016 report by the National Water Development Agency.

Bihar, Rajasthan and West Bengal are among the worst offenders, with more than 18% of rural population in these states unable to access quality drinking water, according to this National Sample Survey Organisation report, titled “Key Indicators of Drinking Water, Sanitation, Hygiene and Housing Condition in India”.

Being “needed at home” is a major reason why children, especially girls from poor families, drop out of school.

Indian states with a lower human development index (HDI 2007-08) report a higher proportion of rural households without a drinking water source near or within the household and correspondingly longer average walking times for rural women to fetch drinking water.

Close to 92% of the IHDS survey respondents reported having enough water through the year, although this figure falls to 80% in the summers.

More than 95% of urban respondents across India report having an “improved source of drinking water”, such as bottled water, piped water or tube well.